With each European using 500 plastic bags per year, and tonnes of plastic littering the Mediterranean, the European Commission may ban them from stores or tax them to combat pollution.
Europe produced 3.4 million tonnes of plastic carrier bags in 2008 -- the equivalent in weight of two million cars, according to the European Union's executive arm. 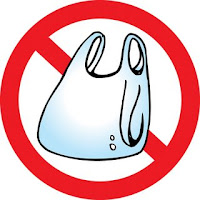 The bags often end up in the sea, taking hundreds of years to decompose, it said. Some 250 billion plastic particles weighing a total 500 tonnes litter the Mediterranean, threatening sea life which can suffocate eating them.
In some EU states, plastic bags are banned from stores or consumers must pay for them in supermarket lines, but there is no EU-wide regulation.
The EU Commission launched on Wednesday a public consultation which will run until August to decide the best course of action to reduce the use of plastic bags.
"Fifty years ago, the single-use plastic bag was almost unheard of -- now we use them for a few minutes and they pollute our environment for decades," said European environment commissioner Janez Potocnik.
"But social attitudes are evolving and there is a widespread desire for change. That's why we are looking at all the options, including a Europe-wide ban on plastic carrier bags," Potocnik said.
The EU executive said it also wants to gather opinions on increasing the visibility of biodegradable packaging products and boosting the biodegradability requirements for packaging.
Source
Publié par PakBec à 22:41