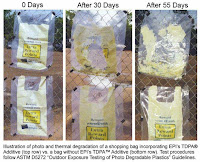 I didn’t even know there was an “oxo-biodegradable PET plastic movement” until a December 3 email notified me of its existence.
Having looked into it a bit, I find that a number of industry experts and observers—including some folks at Wal-Mart—take a dim view of oxo-biodegradable plastic packaging.
First, a bit of semantical housekeeping. The term “oxo-biodegradability” is a relatively new alternative to “oxo-degradability.” When people use these terms, they’re generally referring to a two-step process whereby—in theory at least—a masterbatch additive reduces the molecular weight of the polymer to a point where microorganisms can consume the degraded pieces.
These materials are controversial for at least three reasons. First, their earliest suppliers “overpromised and underdelivered,” as one insider put it. The hype has left a number of people predisposed to frown on oxo-biodegradables.
More significant, little scientific evidence has been available proving these materials would biodegrade, i.e., be consumed by microorganisms and returned to the ecosystem. Lately, that evidence is said to be available from suppliers offering a range of oxo-biodegradable polymers, including polyethylene, polypropylene, polystyrene, and PET. However, the biodegradation these suppliers promise takes anywhere from two to six years, depending on environmental conditions. That means these oxo-biodegradable materials do not meet current U.S. or European standards governing biodegradation and/or compostability.
The other fly in the oxo-biodegradable ointment revolves around what’s referred to as “persistent chemicals.” If the additives used to promote oxo-biodegradation in plastic packaging include cobalt, manganese, or iron, is there a chance that these will somehow accumulate in the soil or sea to a point where toxicity is reached? This is one of the many questions surrounding oxo-biodegradability that needs to be addressed.
Also worth noting is that the National Advertising Division of the Council of Better Business Bureaus on December 8 recommended that Dallas-based GP Plastics, the maker of PolyGreen plastic bags for newspapers, cease claiming its bags are 100% oxo-biodegradable.
I bring all of this to your attention because, despite all the controversy, oxo-biodegradable plastic packaging is beginning to make some commercial headway. Green Planet Bottle Corp. of Toronto has teamed up with Wells Plastics Ltd. of the U.K. to develop Reverte™, a proprietary technology that makes petroleum-based polymers oxo-biodegradable “in landfills, ditches, rivers, and oceans.” First to commercialize this new technology is Ciao Water Inc. of Boulder, CO. The firm has no retail presence but rather sells its bottled water to hotels, conventions, and events. Preforms are being made by Encon Inc. of Dayton, OH. Bottles are blown and filled by Tushar Mountain Bottling, Inc., of Beaver, UT.
Also coming out with an oxo-biodegradable PET bottle is Canadian Gold Beverages Inc. of Marchand, Manitoba, Canada. The masterbatch additive supplier in this case is BioSmart, also a Canadian firm. “Canadian Gold Beverages now offers a completely biodegradable bottle, bottle cap, and label,” says Canadian Gold’s Web site. “This is not a PLA bottle, but instead a new proprietary technology.”
I’m in no position to pontificate one way or another where all of this is concerned. But I do find it fascinating. You can expect to hear a good deal more about it as it makes its way into packaging conferences such as next month’s Nova-Pack 2009, sponsored by Schotland Business Research. Eventually, as this debate unfolds, I’d like to think that sound science will prevail and that these new materials will either be scientifically endorsed or scientifically debunked. In the meantime, you’d do well to know they could be coming to a store shelf near you.
Pat Reynolds, Editor, Packaging World Magazine, January 2009
---
Publié par PakBec à 22:26

My company, BioGreen Products Co., offers biodegradable bottle preforms and caps. As you know, there is a growing sentiment against bottled water on the basis of the problems associated with disposing of the bottles. My company can help your company get ahead of the curve on this issue, by supplying water bottles that biodegrade if not recycled, and which can also be recycled, unlike the better known PLA.

You can learn more about oxo-biodegradable disposable plastic products at our website, http://biogreenproducts.biz/ . Please feel free to contact me if you would like more information or a quote for oxo-biodegradable preforms and or bottle caps. This product is FDA approved for food contact.

Thank you for your time and attention.