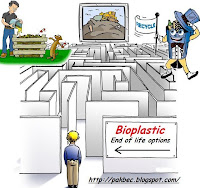 I believe that introduction of biodegradable plastic should be done in a reasonable way which can demonstrate benefit to the environment. If not, the Boom could turn into a Fiasco such as with bioethanol. Bioplastic has a "great potential", but it is "vital" to introduce them with the suitable infrastructure so they could be properly disposed of.
The principal risks arise at the end of life phase. Instead of being composted, bioplastics may find their way into:

I share with you the point of view of the members of the group:

Rob Howe said:
Great question. There are two sides to it. Pros: One is that by using bioplastics, the use of petroleum as a feedstock is minimized and biowaste (in the case of bagasse for example) is used in its production. In addition, these products can be composted successfully in professional composting operations. Thirdly, it is a first step away from use of petroleum-only products (however, it should not be viewed as the endgame either. The downsides must also be considered:
That is the quick and dirty - we have a long way to go in this industry. Bioplastics are a first step but should not necessarily be considered the last.

Another approach might be to use bioresins developed from non-food vegetable oil (e.g., Jatropha) which do not require the use of fertilizer or petroleum in the growth and production processes.

Rob is correct in that if bioresins begin to be used throughout society initially, it would contaminate the recycling stream. On the other hand, there are high volume users (e.g., catering, cafeteria systems, etc.) that control their own waste stream - thereby eliminating the possible contamination. In addition there are many other possible non-disposable uses of bioresins (e.g., everywhere plastics are typically used in our home and factory used).

In my opinion, biodegradable plastics are not part of a sustainable future.

If your target is sustainability, the key is to reduce or eliminate the waste. In Ontario we have been recycling for 20 years and while recycling is better than adding to the land fill, it is best to reduce the packaging we use. The new term for this is PRECYCLE, which refers to fixing the problem at the source. Precycle is the practice of eliminating the waste from the start so there isn't a by-product that has to be recycled... i.e., fix the problem at the source instead of fixing the symptom/by-product.

Matthew Rochte said:
Short answer - No, not in their current usage. They are a "less bad" alternative in terms of consumable bioplastic uses. It has some seriously bad implications if the disposal is not monitored properly.

The biggest concern with bio-plastics is the "monstrous hybrid" dilemma, a term coined by Cradle to Cradle authors Michael Braungart and William McDonough. When we blend natural with synthetic we create monstrous hybrids. The natural can't be broken down and the synthetic can't be recycled. We thereby lose all positive/sustainability traction. It can't be recycled or composted and must be thrown away.

The bioplastic discussion with respect to sustainability has to include talking about the systems in which it will be created, utilized, and ultimately disposed of. The PreCycle that Scott Bennett talks about is a part of this process. As with all new products and inventions we need to ask ourselves "Just because we can make it, should we make it in the first place?"

Mark Loeb said:
I concur with the responses. Our "green" problem boils down to simple math: we consume more that the earth's capacity to meet the demand. It is estimated that if everyone on earth consumed at the same rate as the US, we would need 3 earths. There is only one end game and that is to use only what the earth can support. It doesn't matter if we are talking about bioplastic, hybrid cars or florescent lighting, we need a structural change in our consumption behavior. We can accept this and plan for it or have it imposed upon us.
Bioplastics do less bad which simply kicks the can down the road for awhile.
---
Publié par PakBec à 13:47

Ordinary plastic and recycled plastic can now be made oxo-biodegradable.

This is done by including d2w additive which makes it degrade, then biodegrade, on land or at sea, in the light or the dark, in heat or cold, in whatever timescale is required, leaving NO fragments NO methane and NO harmful residues. Oxo-bio can be tested according to American Standard 6954, and is made from a by-product of oil refining which used to be wasted, so nobody is importing extra oil to make it.

There is little or no additional cost, it can be recycled and it is certified safe for food contact. For general info see www.biodeg.org If all plastic were oxo-biodegradable there would be no North Pacific Garbage Patch.

“Compostable” (or hydro-biodegradable)plastics, usually made from crops, are up to 400% more expensive, many of them are not strong enough for use in high-speed machinery, and they emit methane (a powerful greenhouse gas) in landfill. Also, it is wrong to use land, water and fertilisers to grow crops for bioplastics and biofuels, which drives up the cost of food for the poorest people. See eg The Guardian newspaper (UK) 26th April 2008 http://www.guardian.co.uk/environment/2008/apr/26/waste.pollution?gusrc=rss&feed=networkfront

Home composting of plastic packaging should not be encouraged, as it is often contaminated with meat or fish residues, and temperatures may not rise high enough to kill the pathogens.

They are not really "renewable" either. Just consider the hydrocarbons burned by machines which clear the land, plough the land, make the fertilisers and pesticides, transport them to the farm, sow the seeds, spray the crops, etc etc.

The same applies to growing cotton or jute to make durable bags. These rapidly become unhygienic if a tomato is squashed or milk is spilled, and become a durable form of litter, but they can be made from washable oxo-bio plastic to last up to 5 years.

Oxo-bio plastics degrade in the upper layers of a landfill, so they will take up less space, but they are completely inert deeper in the landfill in the absence of oxygen. They do not emit methane at any stage.

Paper bags use 300% more energy to produce, they are bulky and heavy and are not strong enough when wet. They will also emit methane in landfill