A first-of-its-kind lifecycle analysis finds that clamshell packaging made from Ingeo™, a unique biopolymer derived from plants rather than oil, emits fewer greenhouse gases and uses less energy when compared to clamshells manufactured with petroleum-based rPET (recycled polyethylene terephthalate).
The Institute for Energy and Environmental Research (IFEU), Heidelberg, Germany, http://www.ifeu.de/, conducted the head-to-head lifecycle comparison on more than 40 different combinations of clamshell packaging made from Ingeo™ natural plastic, PET, and rPET. Both Ingeo™ and rPET clamshells outperformed PET packaging in terms of lower overall greenhouse gas emissions and lower overall energy consumed. Ingeo™ clamshells clearly offered further advantages over the petroleum-based rPET in numerous comparisons.
“Brand owners and converters will lower the carbon and energy footprint of clamshell packaging by moving away from PET and rPET to Ingeo™ polymer,” said Marc Verbruggen, president and CEO of NatureWorks, the manufacturer of Ingeo™. “This is true with today’s virgin Ingeo™ and, in the longer term, recycled Ingeo™ will decrease that footprint even more. Furthermore, the high performance of Ingeo™ biopolymer in clamshell applications means that less material may be required to manufacture them — on average 25 percent less.”
Representative results of the lifecycle analysis
The study showed that clamshell packaging consisting of 100 percent rPET emitted 58.6 kilograms of CO2 equivalents per 1,000 clamshells. Ingeo™ 2005, a representative grade biopolymer in the study, emitted 49.2 kilograms — an overall 16 percent reduction in CO2 equivalents. The Ingeo™ clamshell was lighter, yet functionally equivalent in terms of top-load strength.
Energy consumed over the lifecycle for 100 percent rPET clamshells was 1.1 gigajoules. This compared to .93 gigajoules for the lighter, yet functionally equivalent, Ingeo™ 2005 packaging — an overall 15 percent reduction in energy consumed. 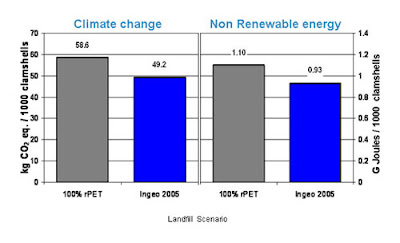 “The study found that Ingeo™ compares favorably with rPET even when a producer chooses not to lightweight a clamshell,” said Steve Davies, NatureWorks director of Communications and Public Affairs. “The study also showed that the next generation of Ingeo™ biopolymer, which will be available in 2009, offers further improvements in eco-profile and clearly outperforms 100 percent rPET in head-to-head comparisons.”
Clear plastic clamshells, like the ones analyzed in the study, are often used for fresh produce and foodservice packaging — for example, lettuce, tomatoes, sandwiches, or deli salads. Currently this packaging is not recycled in either the U.S. or Europe. In the U.S. clamshell packaging typically goes to landfills after use, while in Europe this packaging may be incinerated for waste-heat recovery. The lifecycle study took both end-of-life scenarios into account.
For a copy of the full IFEU lifecycle analysis comparing rPET and Ingeo™ natural plastic clamshells, click here.
Press Release
---
Publié par PakBec à 19:13