Biodegradable bags are garbage and do not belong in recycling bins or composters, Marc MacLeod warns. 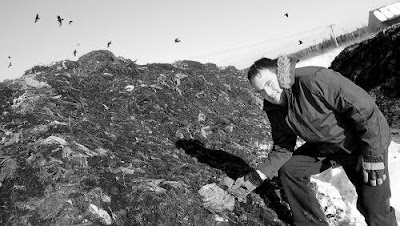 Marc MacLeod, general manager of the Fundy Region Solid Waste Commission, pulls out a plastic bag from a large compost pile at the landfill.
---
MacLeod, who's general manager of the Fundy Region Solid Waste Commission, says biodegradable and oxo-biodegradable bags are starting to appear on store shelves, so he's trying to a clear up a common misunderstanding that biodegradable is synonymous with compostable.
Biodegradable bags are plastic bags with an additive that helps them break down into smaller pieces in the presence of oxygen, he said.
By contrast, compostable bags are made of materials that micro-organisms can eat.
"They can't eat plastic," he said.
"The only place for biodegradable bags is in the garbage."
Recycling is also not an option for biodegradable bags because products made from the recycled material will break down due to a chemical additive.
"If you were making plastic lumber of our recyclable plastic, you don't want a degradable compound in there that's going to break the lumber down," he said.
Evidence of biodegradable bags can be found in the landfill's compost bin, he said.
"We screen it out and it ends up going to the landfill," he said.
"Unfortunately, it doesn't break down in the landfill either because it needs oxygen or in the landfill it gets covered with more waste and doesn't get any oxygen."
The state of California had such a problem with the bags that they passed a law banning bags from being called biodegradable that didn't meet compostable standards because people were so confused, he said.
Only compostable bags, which are marked with the Biodegradable Product Institute's logo are acceptable in the green cart compost program.
"Initiatives like NB Liquor's decision to phase out degradable plastic bags, and to encourage their customers to bring a reusable bag is the direction we should be heading," he said.
"We have two great diversion programs in the Fundy region: our recycling which can recycle plastic bags and the compost program for food and yard waste.
"Biodegradable, degradable or oxo-biodegradable plastic bags do not fit into either of these programs and consequently threaten both of them."
He asks that residents double-check plastic bags before recycling them at the blue bins or using them in their green cart compost bin.
Source
---
Publié par PakBec à 19:39