According to a new study from The Freedonia Group, US demand for high visibility packaging, including clamshell, blister and other types, is expected to increase four percent annually to $8.5 billion in 2012, representing nearly 34 billion units and creating a market for 1.1 billion pounds of plastic resins. Gains will be driven by favorable advances in consumer spending along with the growing influence of mass market retailers, which tend to favour blister packs, clamshells and other high visibility containers for their theft and tamper deterrence and ability to effectively showcase products. Further growth will be limited by the rising volume of offshore production and packaging of such products as toys, games, sporting goods, hardware and electronics. 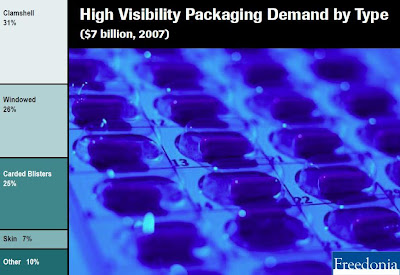