Are booming bioplastics here to stay?

So far, bioplastics only comprise an estimated 0.20 percent to 0.25 percent of total plastics use. But several forecasts predict a boom for the once-brittle plastics that are now beginning to compete with traditional PET and polystyrene.
A recent University of Utrecht study forecast that up to 90 percent of plastics could technically become bio-based in the long term and that production could grow by on average 37 percent annually until 2013. Ceresana Research predicts the largest growth rates in electronics and auto industries. The Freedonia Group, an industrial research company, sees demand growing fastest in the Asia-Pacific region, and some predict the U.S. market to reach $10 billion a year by 2020, a tenfold increase from 2007.
Both Natureworks and Metabolix companies see the future in cellulosics such as grasses and non-edible plant parts. "Crops like sugar cane and switchgrass have the potential to grow in acres where crops can't be grown or those grown are of marginal value," Peoples said. "It really allows you to produce bio-based, bio-degradeable materials from agriculture without impacting food."
---
Even at competitive cost, bioplastics companies must persuade critics and those confused about how environmentally friendly the different kinds of bio-plastics really are. Lack of composting facilities could push bioplastics into landfills, where certain types would release more damaging methane than traditional PET plastics. Worries that bio-plastics could contaminate the PET recycling stream has some retailers hesitating.
---
Market growth, stricter government standards for plastics and limits on land filling are encouraging more research into improvements and solutions, but bio-plastics will not be a miracle cure in an "either-or" scenario with oil-based plastics, producers and experts say.
---
Bioplastic: The 8 Percent Solution

The future of plastics once fossil fuels run dry or the price for it becomes too expensive is bioplastics.

But that alternative future is distant, measured in terms of decades, says Frederic Scheer, chairman, president and founder of Cereplast Inc., a Hawthorne, CA, company that designs and manufactures bio-based, sustainable plastics.

Scheer may be a visionary and a pioneer when it comes to bioplastics, but he’s also realistic about the challenge and the effort it will take to penetrate and begin to replace the traditional plastic market. The biggest bioplastics inroads will occur first in packaging and foodservice markets, Scheer says.

And bioplastic was not on anyone’s agenda at COP15, says Scheer. “They don’t realize that bioplastics are part of the solution.” About an 8 percent solution, because fossil fuel byproducts comprise 8 percent of fossil fuel consumption, Scheer notes.

It’s “sad but true that people are environmentally conscious when it’s convenient and affordable,” Scheer admits.

That’s yet another aspect of the insidious addiction to oil: A worthy emerging alternative to fossil fuel byproducts is captive to the price of oil and won’t really take off until the price surges and remains at a high level. Does anyone believe the oil majors will let that happen? 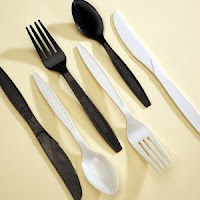 A University College Dublin research team recently patented a process to produce biodegradable plastic from plastic bottles, and that patent has led to the formation of a company, Bioplastech Ltd., to develop, process and market the technology.

Dr. Kevin O’Connor, founder and CEO of Bioplastech, led the team and the biodegradable plastic they produce is called polyhydroxyalkanoate (PHA).

The Ireland-based Bioplastech converts waste, agricultural byproducts and petrochemical products into PHA, a linear polyester produced by bacterial fermentation of sugar or lipids that can store carbon and energy.

The company, which was formed last year and employs 10 people, is also looking at waste food oils and biodiesel.

Sugar-based chemical feedstock seems to be prominently featured in 2009 as several developments continue to center on the promise of sugar as alternative to petroleum.

A major product is bioplastic such as bio-polyethylene made from sugarcane-based ethylene. Brazilian chemical company Braskem is a prominent developer in this area. Braskem also recently announced its development partnership with enzyme company Novozymes for bio-propylene using sugar-cane as feedstock.
---
Publié par PakBec à 04:36