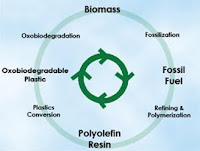 The Bioplastics Council, a special interest group of SPI: the Plastics Industry Trade Association, today announced the release of a position paper that questions the scientific validity of biodegradability claims made by producers of “oxo-degradable" and "oxo-biodegradable" products. The Council’s paper formally supports the point of view put forth by European Bioplastics in a July 2009 publication.

Since its inception in 2008, the SPI Bioplastics Council has placed consumer and industry education at the core of its mission. In fact a key Council objective for 2010 has placed a new emphasis on clarifying “bioplastics-related” marketing claims. In the position paper released today, the Council outlines the issues and questions concerning oxo-biodegradables and other degradable additives in order to support consumers, retailers and the plastics industry in identifying unsubstantiated and misleading product claims.

Producers of pro-oxidant and biological additives use the term “oxo-biodegradable” to describe the resulting products made using the additives. This term suggests that the products can undergo rapid biodegradation under many different end-of-life conditions. However, the main effect of oxidation is fragmentation, not biodegradation, into small particles which remain in the environment for an undetermined amount of time. These results do not meet the internationally established and acknowledged standards and certifications that effectively substantiate claims on biodegradation under certain specific end-of-life conditions.

“In 2010 we made a pointed decision to insist on bringing clarity to the bioplastics market,” said Bioplastics Council Chair Frederic Scheer, CEO of Cereplast, Inc. (Hawthorne, Calif.). “Allowing the brand owner, retailer or ultimately the consumer to decide what they consider a biodegradable product to be is risky, as they may lack the scientific knowledge to make an accurate decision. The Bioplastics Council supports legitimate scientific data as recommended by state and federal agencies and stresses the need for all companies, when making product claims, to work along guidelines defined by the Federal Trade Commission.”

“The Council has issued this position paper because its member companies believe that it is the duty of the industry to provide clear, substantiated scientific data that will assure stakeholders that the products offered meet their requirements for end-of-life disposal options, including industrial composting, home composting, water, soil or the ocean,” added Melissa Hockstad, SPI vice president, Material Suppliers Council.

Launched in 2008, the Bioplastics Council was created to provide a forum for resin and additive suppliers, as well as processors and equipment suppliers, to promote the development of bioplastics. Currently, the eight members of the group are Arkema, BASF Corporation, Cereplast, Inc., DuPont, NatureWorks LLC, PolyOne, Teknor Apex and Telles (a Metabolix/ADM Joint Venture).
---
Publié par PakBec à 18:22