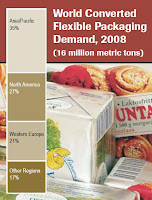 According to a new study from the US-based research group, Freedonia, worldwide demand for converted flexible packaging is forecast to grow 3.6 percent per year to over 19 million metric tons in 2013, faster than real (inflation-adjusted) gains in GDP.

Factors contributing to that growth will be:

According to the report, it is developing nations which will show the biggest growth in demand. It states, “Asia, Latin America, Eastern Europe and the Africa/Mid East region will outpace the global average. Population growth and greater urbanisation (except in Eastern Europe), industrialisation trends and expanding international trade will support advances in these region’s generally under-developed packaging sectors.

China has over taken Japan to become the globe’s second largest converted flexible packaging market after the United States.

Significant growth is predicted for India, which will benefit from strong growth in domestic output and consumer product.

Russian and Indonesia are also likely to show big growth thanks to greater investment in state-of-the-art manufacturing equipment leading to improved product quality.

In developed countries, such as the US, Western Europe and Japan, the rise in demand for plastic films will be limited by the mature state of the packaging market.