Supermarket giant Tesco has said that it will not be taking compostable packaging "any further" and that it could even remove it from its stores altogether. 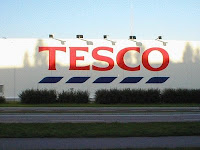 Speaking at the LARAC conference in Liverpool earlier this month, Sion Stanfield, head of waste and recycling at Tesco, outlined the work that the retailer was doing on recycling and packaging minimization - including moves towards more recycled content, smaller portion sizes and installing recycling units at its larger stores.
However, he said that compostable packaging - such as film - could "mess up" recycling systems and was therefore something the company would not be taking further. At present, Tesco uses home compostable film on a small range of organic products. This includes a cellulose-based film produced by Innovia Films called Natureflex. He said: "We are not taking compostable packaging any further as we know it makes a bit of a mess [of your recycling systems]. If anything it will come off the organics range which is where we have got it and have tested it."
Explaining his reasoning, Mr Stanfield said that Tesco had found that the packaging confused people who did not know to recycle it and they could end up disposing of it incorrectly. This echoed a warning by WRAP in 2007 that bioplastics could cause "serious problems" for recyclers and that the public did not know how to dispose of them.
However, commenting on the move, Andy Sweetman from Innovia Films said that consumers of Tesco's organics range were switched on about waste and therefore would know how to handle the material. The business development and sustainability manager, who is chairman of the board of European Bioplastics, also pointed out that there would be no problem with the film getting into industrial recycling processes because film was not widely recycled in that way. However, he agreed that there was some confusion over home compostable packaging and how it differed from packaging which was simply compostable - pointing out that a new logo was set to be launched next month to remedy the situation. This will be at the Association for Organics Recycling event in Coventry entitled 'Clarifying Compostable Packaging - the Way Forward!'
He said: "Where I would agree in terms of consumer confusion is that it is very important for our film to perform the same as packaging films and it is important that it looks like any other. The key is to label effectively.
"The Association for Organics Recycling is about to launch the logo for home compostable packaging because there has been some confusion about home compostable packaging until now that the seedling logo is for industrial composting. That is going to be clarified. Letting consumers know what to do with those materials is vital. I believe that if you label properly you can avoid confusion," he added.
Long-term
Mr Stanfield claimed that in the long-run, with oil running out, Tesco may revisit the idea of compostable bioplastic packaging but said that he did not envisage this any time soon.
Source
---
Publié par PakBec à 21:55