RFID for meat authenticity and traceability

Consorzio del Prosciutto di San Daniele, a consortium of ham producers based in the northeastern Italian city of San Daniele del Friuli, has completed the first phases of an RFID based pilot designed to track the production of prosciutto and verify its authenticity. The group plans to expand tests of the passive RFID system over the next 12 months, eventually requiring its members to adopt the technology.
The main reason the consortium hired consultants to design and test the RFID system was to create a method for verifying a ham's authenticity. The group, however, also sought a way to increase its ongoing efforts to ensure that producers comply with health and hygiene standards. Toward this goal, the consortium eventually hopes to use RFID to track the entire production process, from the time pigs arrive at the slaughterhouse until the prosciutto is sent to warehouses and retail stores. 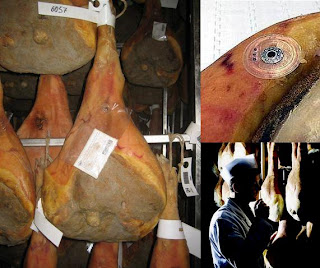 "We want to protect the consumer so that each person knows the story of each ham through RFID, including when the pig was born and details about its life and death," says Paola Visentin, a spokeswoman for Softwork, the company that designed and tested the system.