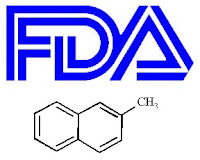 Federal regulators, who are charged with ensuring the safety of food and consumer products, are in the dark about the suspected chemical, 2-methylnaphthalene. The Food and Drug Administration has no scientific data on its impact on human health. The Environmental Protection Agency also lacks basic health and safety data for 2-methylnaphthalene -- even though the EPA has been seeking that information from the chemical industry for 16 years.
Because the FDA does not know anything about the toxicity of 2-methylnaphthalene, the agency set its limit based on what it knows about the toxic effects of similar chemicals, Cheeseman said.
He added that the FDA does not know what caused the Kellogg contamination, how much 2-methylnaphthalene might have migrated into the cereals or if it was the only contaminant. The agency did not perform its own tests on the cereals.
Roberta Wagner of the FDA's office of regulatory affairs said Kellogg destroyed most of the tainted liners before it contacted the agency and announced a recall.
"Basically, Kellogg's investigated the situation before they made the decision to do the recall," Wagner said. "They did their own testing." She said the agency continues to investigate.
The company submitted a copy of its health risk assessment to the FDA, but neither Kellogg nor the agency would release it.
Cheeseman said it is unusual for contaminants to migrate from packaging into foods.
Read full paper: Washington Post
Publié par PakBec à 23:52