Cereplast, Inc., manufacturer of proprietary bio-based, sustainable plastics, today announced that it has received confirmation of the low carbon footprint of its bioplastics-based Biopropylene® resin. In conjunction with Ramani Narayan University Distinguished Professor of Michigan State University, and after several months of research by an independent testing laboratory, it is demonstrated that the intrinsic carbon dioxide emissions reduction in using Biopropylene® in place off regular polypropylene is 42%. 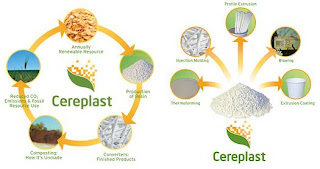 The study found that approximately 1.82 kilograms of carbon dioxide are produced for each kilogram of Biopropylene® used, compared to 3.14 kilograms of carbon dioxide emitted for the same amount of polypropylene.
---
“By using Biopropylene® instead of polypropylene, converters generate 1.32 kilos less carbon dioxide for each kilo of product they manufacture,” said Frederic Scheer, Cereplast’s Chairman and CEO. “This is a very significant reduction in carbon dioxide emissions, especially when considering that worldwide market for polypropylene is about 45 billion kilograms, or approximately 100 billion pounds.”
--
“This recent development offered by Cereplast is quite interesting. I see this family of resins providing an intrinsic reduced carbon footprint value,” said Professor Narayan.
---
“Besides dramatically reducing carbon dioxide emissions during conversion, Biopropylene® also delivers the environmental advantage of replacing up to one-half of the petroleum content in traditional plastic with renewable, bio-based materials,” continued Scheer. “Furthermore, Biopropylene® can be used in a variety of applications which so far were satisfied only with traditional polypropylene.”
---
Biopropylene® is a patented compound manufactured by Cereplast using traditional polypropylene and up to 50% starch content, making it the first real “hybrid” bioplastic. Since its introduction at the end of 2007, Biopropylene® has been tested by more than 90 major corporations, with particular attention from companies in the automotive, consumer products and cosmetics industries. While the drivers vary by industry, significant interest in Biopropylene® has been motivated by some of the new properties that it offers, such as better printability, softer touch, and other attributes.
--
Source: Cereplast, Inc
---
Publié par PakBec à 21:39