Stonyfield: PLA for the yogurt cups 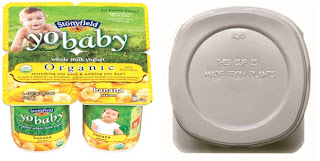 This is a major transition for a company of Stonyfield’s size, especially given its cache among sustainability-focused firms. But it’s also not a perfect solution. For one thing, the PLA is produced by NatureWorks, a subsidiary of the agri-giant Cargill, and a company one might be surprised to find linked to the yogurt-maker, which prides itself on using organic ingredients and supporting sustainable agricultural practices. Also, the PLA cups are no more recyclable than the polystyrene they are replacing—in fact, there are only two facilities that recycle the PLA, and only one in the U.S.
Still, as Nancy Hirshberg, Stonyfield’s vice president of natural resources, told Triple Pundit, while PLA isn’t a perfect solution, it’s a better one than continuing to use polystyrene. Because the new packaging is comprised of 93 percent PLA, it’s mostly corn. And regardless of whether that corn is from genetically modified seed, it’s still not the oil used in polystyrene. In fact, Stonyfield figures that 48 percent fewer greenhouse gases will be emitted each year by transitioning from polystyrene to PLA for the yogurt cups.
And while you’re not going to find any municipal systems that will take that empty PLA cup away in the blue bins, Stonyfield says it is a priority for the company to launch a pilot program to take back the packaging from consumers and send it to the U.S. recycling facility (in Wisconsin), where it will actually be recycled back into PLA, and not downcycled into other products, which is the fate of petroleum-based plastics (such as the polypropylene used in other Stonyfield packaging). And speaking of that other packaging, she says Stonyfield is always researching alternatives to petroleum-based plastics for all its products, but for now, the PLA will only replace its polystyrene containers.
But the bigger impact that this decision may have on makers of consumer packaged goods, in general, is to inch the industry a bit closer to bio-based plastics. However, it’ll be a long and bumpy road before PLA is truly sustainable packaging, and building out a proper take-back and recycling infrastructure for this material will take many years. In the meantime, most YoBabies will end up in the YoLandfill.
Read more…
Publié par PakBec à 17:43