Packaging Market is the Largest Market for Biopolymers 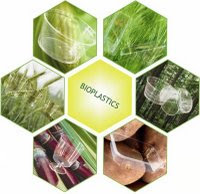 Global Biopolymer Market Forecasts and Growth Trends to 2015-Starch-based Polymers Driving the Growth”, provides an in-depth analysis of the global biopolymer industry. The total global biopolymers market by volumes is set to grow at a CAGR of 27.3% from 2009 to 2015 to reach 2,680,590 tons.
The packaging market is the oldest market for biopolymers. The biodegradability and the bio-based raw materials make it a perfect choice for packaging. It is estimated to hold a revenue share of 53.2% in 2009. However, with the other markets such as automotive, medical and electrical & electronics applications are also growing at a higher rate. This will lead to the packaging market losing its volume share in the forecast period between 2009 and 2015.
Toyota to use new bioplastic in Lexus

Toyota Motor Corp. announced Wednesday the development of a new kind of plant-derived bioplastic for use in vehicle interiors that it claims has improved heat resistance and durability. The carmaker said the first application of the new material will be in the trunk of the luxury hybrid Lexus CT200h, which is due out at the start of 2011.
Because of its superior heat resistance and durability, Toyota believes the new bioplastic can also be used for the seats and carpeting in cars.
While use of the material initially will be limited to the trunk of the Lexus CT200h, Toyota plans to release a car next year that will use plant-derived bioplastics for 80 per cent of its interior
Natural bioplastic material could make cars biodegradable

To educate the public about what car parts are compostable bioplastics, Solegear is working with the recycling industry to introduce the number 8 that could be stamped on parts using its material to let people known that when a bioplastic product can be composted to create soil for gardening or fed into a anaerobic digester to create gas for energy use. Right now 7 is a catch-all category for plastics, and is currently used on bioplastics.
When the public will need to start looking for the telltale stamp of a biodegradable plastic is still up in the air. Although, they have meetings lined up with carmakers, no contracts are in place. But Reid emphasizes that automotive manufacturers have the potential to be leaders in the adoption of green chemistry.
"You don't have to look far to see soy-based polymer being used in seats, and now there are even more durable bioplastics coming into the market, he says. "The automotive industry stands to benefit because we live in a world of finite resources, and switching to renewable resources provides a competitive advantage for generations to come."
But a completely compostable car probably isn't in the cards, says Reid, "there are some aspects of a car's engineering that requires metal.
Publié par PakBec à 17:16