Biopolymers are the more eco-friendly material, but farming and energy-intense chemical processing means they are dirtier to produce than petroleum-derived plastics, according to study in Environmental Science & Technology.
The researchers examined 12 plastics—seven petroleum-based polymers, four biopolymers, and one hybrid. The team first performed a life-cycle assessment (LCA) on each polymer’s preproduction stage to gauge the environmental and health effects of the energy, raw materials, and chemicals used to create one ounce of plastic pellets. They then checked each plastic in its finished form against principles of green design, including biodegradability, energy efficiency, wastefulness, and toxicity. 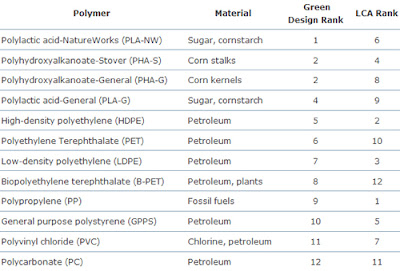 Biopolymers were among the more prolific polluters on the path to production, the LCA revealed. The team attributed this to agricultural fertilizers and pesticides, extensive land use for farming, and the intense chemical processing needed to convert plants into plastic. All four biopolymers were the largest contributors to ozone depletion. The two tested forms of sugar-derived polymer—standard polylactic acid (PLA-G) and the type manufactured by Minnesota-based NatureWorks (PLA-NW), the most common sugar-based plastic in the United States—exhibited the maximum contribution to eutrophication, which occurs when overfertilized bodies of water can no longer support life. One type of the corn-based polyhydroyalkanoate, PHA-G, topped the acidification category. In addition, biopolymers exceeded most of the petroleum-based polymers for ecotoxicity and carcinogen emissions.
However, once in use, biopolymers beat traditional polymers for eco-friendliness, according to researchers. For example, the sugar-based plastic from NatureWorks jumped from the sixth position under the LCA to become the material most in keeping with the standards of green design.