I share with you the comment of Jim Lunt in the Biodegradable plastics LinkedIn Group.
Watching the twists and turns this discussion is taking, I think it really is time to get back to facts and put aside vested interests and non factual assertions.
The product (Frito-Lay Sunchips Biodegradable bag) is noisy and yes it is compostable as defined in the industry accepted ASTM D6400 and yes Frito lay appear not to have been completely clear in their marketing. However the product is compostable as defined by the above standard. The conditions of this standard are very specific on 3 elements:
1. Mineralization
• At least 90 percent conversion to carbon dioxide, water and biomass via microbial assimilation.
• Occurs at the same rate as natural materials (i.e. leaves, grass food scraps.)
• Occurs within a time period of 180 days or less.
2. Disintegration
• Less than 10 percent of test material remains on a 2mm sieve.
3. Safety
• No impact on plants, using OECD Guide 208.
• Regulated (heavy metals less than 50 percent of EPA prescribed threshold.)
It is true that the temperatures and humidity are much higher in this test than found in back yard environments (Whether you agree or disagree with this standard is a completely different debate).
PLA will also compost and be digested by microorganisms in lower temperature and humidly as typically found in backyard composts; the issue is there is no standard, so no one can say exactly how long it will take. Without defined conditions, a standard for the industry cannot be established and we begin to see proliferation of unsubstantiated claims.
PLA will not degrade in the sealed environment of “unmanaged Landfills” which are designed to be sealed tombs where no bacterial activity occurs. Neither will anything else degrade in this environment as has been shown repeatedly. 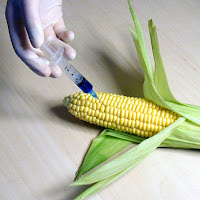 The discussion around GMO is relevant since in Europe this is a significant concern and explains why companies such as PURAC and Galactic are beginning to offer non GMO sourced feed stocks. Genetically modified corn has been increasing in the USA for several years but its use is in no way being driven by the production of PLA.
The current Natureworks PLA plant, at full capacity, will produce 300 million pounds of PLA per year to produce this; 750 million pounds of corn (with 15% moisture) are required. The total 2002 US corn for grain production was 9 billion bushels or 504 billion pounds (1 bushel = 56 pounds = 25.4 kg). So, at full capacity PLA will take 0.15% of the total corn for grain production in the USA — less than one-fifth of one percent. (Source)
So it is quite ludicrous to suggest that PLA is driving genetic modification of corn. Today Natureworks have no alternative but to use the cheapest supply of sugar which in the USA happens to be from GMO feed corn. Natureworks, I believe would love not to have to use this due to the ongoing debate, but in the end cost of the product is a driver for the marketplace. They have offered alternatives to their customers which would allow them to buy PLA from a non GMO source but I believe the economics make this non practical. In the end they and others who make products from sugars will find non GMO sources if this is what the consumer demands. Also I am not saying that GMO is good or bad –just stating a fact.
Finally, contamination of the waste stream. Primarily today this is PET bottles. Natureworks have tried to penetrate this market and have come into conflict with the recycling community. To attempt to alleviate this they are working with BioCor who is buying back the PLA bottles and converting them back to lactic acid. While this is in its infancy, like all technologies once a critical mass of product is available then this could be a viable more cost effective alternative to composting.
Publié par PakBec à 23:21