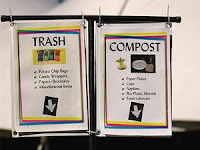 Bioplastics bring with them potential benefits both at the start and end of their lives. On one side, they're made with non-petroleum materials that are typically non-food crops or waste. At the other end, they can be composted and in some settings provide energy.
A big challenge surrounding bioplastics is that end-of-life phase since there is slim infrastructure for properly disposing of some types of bioplastics and a lack of standards that match real-life composting situations.
Kelly Lehrmann, a consultant with bioplastic producer FKuR Plastics Corporation, said there are around 50 facilities in the U.S. that accept compostable bags and 44 that take compostable food service items like utensils and cups.
"Currently bioplastics are not really welcome in the recycling stream," she said. "(Recyclers are) having a very difficult time being able to separate it."
The main disposal method for bioplastics is composting, but compost facilities have varying turnover times and temperatures, sometimes differing from standards like ASTM D6400, a specification for compostable plastics in municipal and industrial composting facilities.
More so, there is no standard for anaerobic digestion, a process that uses microorganisms in an oxygen-free environment to degrade materials, said Robert Whitehouse, director of applications development for bioplastic maker Metabolix.
"(Anaerobic digestion) is an important operation because it provides a fuel for operating the facility and putting energy back in the grid," he said. Other composting methods lose that energy, but still create compost.
With a lack of standards that match how facilities are really operating, composters are wary of accepting bioplastics since they don't want to deal with contaminants, nor would they want to slow down their operations to meet possibly longer degrading times needed for bioplastics.
UL Environment green chemistry scientist William Hoffman said UL Environment is looking at how to better match testing methods for products with actual composting conditions in order to help make claims of compostability stronger.
For now UL Environment is working with manufacturers to oversee lab tests to validate claims of biodegradability based on the test methods used, but there is still the lack of an overall standard to use when claiming something will biodegrade in an anaerobic digester.
Source