The problem with green plastics

While the bioplastic industry (the European Bioplastic group in particular) are trying to distance themselves from oxo-biodegradables, the National Association for PET Container Resources (NAPCOR), meanwhile, are refuting the PLA (polylactic acid) bioplastic claims that they can be recycled with PET (polyethylene terephthalate) plastics. 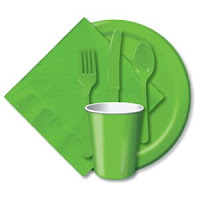 Let's start with oxo-biodegradables where according to the European Bioplastics group, companies producing these plastics failed to back up their biodegradability or compostability claims as according to internationally accepted standards such as ISO 17088, EN 13432, etc. The group said they also do not want any attempt from the oxo-biodegradable industry to water down the criteria of the EN 13432 such as requesting longer timeframes for materials to decompose.
"Bioplastics are still a relatively young industry. It is therefore vital that claims on biodegradability or compostability are backed by internationally accepted standards." - EB
PLA-bioplastics meanwhile, are having a hard time convincing the plastic industry that they can get along with PET when it comes to recycling. According to NAPCOR, recycling PLA with PET might increased contamination and yield loss of recycled PET as well as impact its quality and processing.
"The reality is that the PLA container becomes a contributor to PET bale yield loss which is already a big concern for PET reclaimers, as is the additional fraction of marketable PET which will invariably get sorted out along with the PLA. So not only is there an increased cost for sorting and a higher yield loss, but without any practical way to aggregate the sorted material, or markets for it, it's destined for landfill." - NAPCOR
In a recent bioplastic webinar hosted by the Environmental Protection Agency (EPA), PLA bioplastic producer NatureWorks said that they are looking into sorting technology such as infrared (NIR) sorting systems and that PLA should be treated for now as other non-PET/HDPE plastics in the recycling stream.
"It is not NatureWorks intent to be an SPI Code #1," said Brian Glasbrenner, NatureWorks business Director, Americas. "The bioplastic industry is working to have its own SPI code and with critical mass, PLA will soon be isolated into its own value stream."
NatureWorks said they are also looking to recycling their used PLA plastic back into the lactic acid feedstock, which would be more economical for the company. The company is already working with European lactic acid producer Galactic, where it is building a 1,500 tonne/year plant to produce lactic acid from recycled PLA plastic. The plant is expected to be operational this year.
Source
Read the response of GregS from Green Plastics
----
Publié par PakBec à 00:01