According to VTT Technical Research Centre (2008), Printed intelligence are components and systems, which: 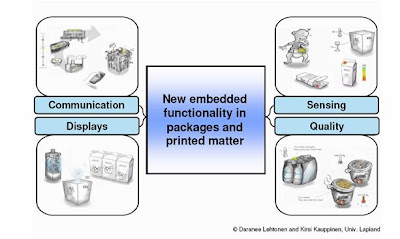 In principal packaging serves product protection (conservation) and promotion. Organic and printed electronics could help manufacturers upgrade packaging plastics to active early warning systems or cardboard boxes to multi-media information carriers. Current trends and the latest developments in this area were on display last June at the LOPE-C, the Organic & Printed Electronics Convention, in Frankfurt, Germany.

First video in print to appear in American magazine advert

The World's first video in print advertisement will appear in next months edition of the American show biz magazine "Entertainment Weekly".

Broadcast network company CBS will run the ad to promote their Monday prime-time lineup in partnership with PepsiCo who will endorse Pepsi Max soda, state CNET news, which is published by CBS Interactive, a unit of CBS. The magazine with the special inserts will be delivered to a limited number of subscribers in the New York and Los Angeles areas.

The screen uses thin film transistor liquid crystal display (TFT LCD) technology, protected with polycarbonate. It is 2.7 millimeters thick, with a resolution of 320x240, which has been in development at Americhip for the last two years. The battery lasts for about 65 to 70 minutes, and can be recharged with a mini USB cord - there's a jack on the back of it.