From cups and plates to dog-waste bags, plenty of products these days claim to be biodegradable. But the Federal Trade Commission appears poised to make such claims all but impossible for most marketers.

On Tuesday, the F.T.C. charged Kmart and two other companies — Tender Corp., and Dyna-E International — with making “false and unsubstantiated claims” that their products were biodegradable.

This is not the first controversy to arise recently over the use of the term “biodegradable.” A maker of plastic bags for newspapers recently scaled back its eco-friendly claims after being challenged over the bags’ biodegradability. The situation was handled through the National Advertising Division of the Council of Better Business Bureaus, a self-regulatory body.

Managing Risk in a Package Redesign: What Can We Learn from Tropicana? 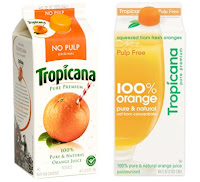 Earlier this year, we witnessed one of the most publicized packaging missteps in recent memory. Indeed, Tropicana’s misguided redesign has already become infamous as, perhaps, the most notable marketing debacle since the introduction of New Coke nearly 25 years ago.

A recap. On January 8th Tropicana North America introduced a revolutionary new look for its flagship Tropicana Pure Premium brand, the market leader with over $700 million in North American sales. This design change was driven by and linked to a new $35 million advertising campaign that prominently featured the new packaging.

Over restrictive federal regulation of nano science should not be allowed to strangle the benefits the technology could bring to food safety, quality and availability, warns William Norwood, president nanoAgri Systems.

Speaking at the IFT International Nanoscience conference at Anaheim, California, Norwood told FoodProductionDaily.com that: “The benefits of nano technology across a wide range of industries could be more important than nuclear energy. But restrictive rules could kill it…Nano is now a fear word.”

Environmental groups are lobbying the Environmental Protection Agency in a bid to persuade it to close the US nano industry, he said.