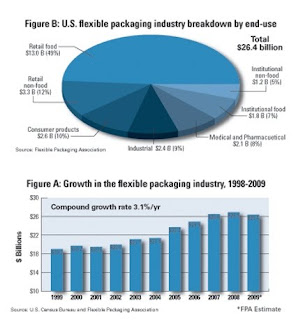 The Flexible Packaging Assn. predicts U.S. sales revenue to reach $27.3 billion this year. Also, raw materials pricing supplants the economy as the primary concern of survey respondents.
Providing a historical outlook of the flexible packaging industry, the “2010 FPA State of the Flexible Packaging Industry Report” is prepared by the Business & Economic Research Div. of the Flexible Packaging Assn.
Specifically, sales revenue is expected to increase 3.4% to $27.3 billion this year, up from $26.4 billion. The FPA reports that flexible packaging represents about 18% of the estimated $143 billion U.S. packaging market.
Read more…
Bioplastics: Technologies and Global Markets