Degradable Plastics: US demand to rise nearly 11% annually through 2014 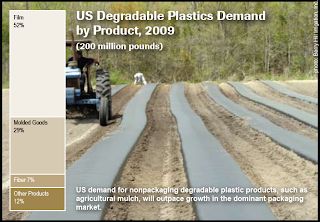 According to a new study from The Freedonia Group, demand for degradable plastics in the US is projected to rise nearly eleven percent annually to 335 million pounds in 2014, valued at $390 million.
Although representing less than one-half of one percent of all thermoplastic resin demand in 2009, degradable plastics will exhibit substantial growth opportunities. Degradable plastic advances will be fostered by their increased cost competitiveness with petroleum-based materials as well as their sustainability and more benign environmental profile.
Degradable plastics demand is being broadened by enhanced performance properties brought about by more sophisticated polymerization and blending techniques. Testing and certification standards have also been established for many types of biodegradable plastics, with growing pressures to limit packaging waste and expand the composting infrastructure.
Polylactic acid to be fastest growing degradable plastic
Polylactic acid (PLA) will grow at the fastest pace through 2014, driven by a more competitive price structure and greater availability. Myriad opportunities are expected, particularly in fiber applications such as nonwovens. Starchbased plastics will have a good outlook as a result of improved resin blends and applications in such areas as compostable yard and kitchen bags, as well as foodservice items such as plates, bowls and cutlery. Demand for polyhydroxyalkanoates (PHAs) will more than double, driven by an increase in the availability of PHA plastics and products. Opportunities are expected in areas such as films and molded containers. Slower growth is expected for photodegradable films such as ring carriers due to a maturing beverage container segment and competition from shrink film and paperboard packaging.
Nonpackaging products to outpace packaging market
Packaging, which accounted for nearly three-quarters of all degradable plastic in 2009, will exhibit good growth through 2014 in film and molded containers. However, most rapid growth is expected for nonpackaging products, particularly textile fibers in areas such as nonwovens, bedding and apparel. Other degradable nonpackaging products include compost bags, foodservice disposables and agricultural mulch.
Publié par PakBec à 10:37