Global Corrugated Board Market to See 5% Growth to 2015

The global corrugated board packaging market is forecast to grow to 98 million tonnes in 2015, a new study by Pira International reveals. According to the study, the sector is to grow by a CAGR of nearly 5% between 2010 and 2015, with the highest expansion rates forecast in Brasil, Russia, India, China (the BRIC countries) and Poland.
Actual consumption of corrugated board was 77 million tonnes in 2009, with an exconverter value of almost $82 billion. Asia was 44% of total corrugated board production, China was almost 25% and the US was 20%. Pira expects the overall market to rise 1.2% in 2010 to 78 million tonnes. For the period to 2015 the outlook is more positive with a forecast CAGR of 4.7%, taking the market to 98 million tonnes in 2015.
Pira expects the growth rate to vary by country. "Over the short term, we forecast that developed markets will show slight declines in consumption. At the same time we believe that India, China, Russia, Poland and Brazil offer the most compelling growth prospects in the five years to come", says Adam Page, Head of Editorial at Pira.
More than 60% of corrugated board is used to package non-food products. The largest single end-use sector is the electrical goods market. Processed food is 25% of the total demand and all food is just under 40%. Pira expects the strongest prospects will be found in personal and household care products, glassware, electrical goods and chemicals. Processed food will be 25% of incremental volume, over 5 million tonnes of additional demand between 2010 and 2015. In food markets, the BRIC countries - Brazil, Russia, India and China - offer the most exciting growth prospects, along with Poland and Brazil; forecast incremental demand for 2010-15 is 7 million tonnes and China will take 4 million tonnes. 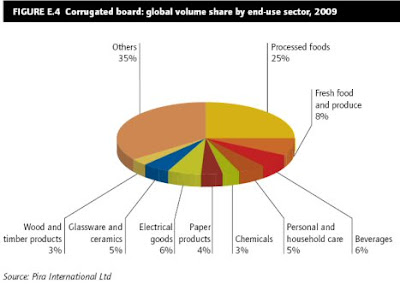