Biodegradable, or just a load of old rubbish? 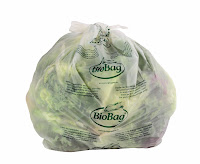 As biodegradable bags have hit the market, consumers have also been hit by confusing information. Because all bags aren't created equal. Some bag manufacturers have been sued for making eco-claims that were not true, while some municipalities ban compostable bags because not all biodegradable bags are compostable ... leaving consumers confused about which bags actually benefit the environment.
---
It also helps to know the difference between the terms biodegradable and compostable, says Susan Antler, executive director of the Compost Council of Canada. Biodegradable refers to a product that can change its chemical structure, but doesn't specify how long the change will take or what the product will change into. Compostable means a product will decompose in a composting site within a set time frame and turn into materials that form compost.
---
As a result, the label biodegradable is no longer considered a guarantor of green. "If a claim is that a product is only biodegradable, I don't even pay attention," says the Compost Council of Canada's Ms. Antler. "Biodegradation could be five, 100 or 500 years."
---
"In a landfill there is no oxygen and very little water. The biodegradation that takes place is absolutely minimal," Mr. Muir says. Consumers are mistaken if they believe the compostable shopping bags they get from a store and then throw out will quickly degrade into soil at a landfill.
A landfill isn't designed for materials to biodegrade. "It just compacts more than it breaks down," says Pat Parker, director of support services in Hamilton's operations and waste management division.
---
Read full paper
---
Publié par PakBec à 16:05