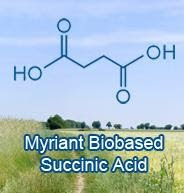 Myriant Technologies LLC (as successor to BioEnergy International), a leading biotech developer and manufacturer of renewable biochemicals, has been selected by the U.S. Department of Energy (DOE) to receive up to $50 million for its planned biobased Succinic Acid facility in Louisiana. Notably, among the 19 integrated biorefinery projects that won funding or loan guarantees, Myriant was the only award focused exclusively on biobased chemicals rather than biofuels.
---
The DOE and other third-party studies have previously identified biobased Succinic Acid as a priority among the top 12 chemicals by market size that can be derived from biomass. Succinic Acid is used in a wide variety of applications including plastics, fibers, polyesters and pigments.
---
Myriant's production of biobased Succinic Acid will utilize both local sorghum and carbon dioxide (CO2) to displace petroleum-based feedstocks, using less energy than its petroleum alternative. In addition to the energy savings, by consuming CO2 rather than producing it via oil refining methods, Myriant's process dramatically reduces lifecycle greenhouse gas emissions.
--
Read more…
---
Publié par PakBec à 13:49