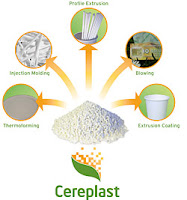 Cereplast announced this week that it expects the U.S. bio-plastics market to top $10 billion in sales by 2020. As of 2007, the U.S. bio-plastics market accounted for approximately $1 billion in sales. Some estimates point to bio-plastics capturing up to 30% of the total plastics market within ten years.
New ‘Green’ initiatives by the Obama administration and increasing consumer demand for compostable and renewable plastics are pushing the market. “We believe that breakthrough products like our Cereplast Compostables® and Cereplast Hybrids® are enabling manufacturers to make the switch to environmentally responsible, sustainable packaging,” stated Mr. Frederic Scheer, Founder and CEO of Cereplast. “Our algae-based bio-plastics, currently under development, will soon open up a whole new source of feedstock and result in a broad range of new applications.”
“American consumers are pushing major manufacturers and retailers to make the switch to environmentally conscious solutions. Many of the largest retailers have already made in-roads with programs designed to adopt alternative packaging, including Wal-Mart and Coca-Cola,” added Mr. Scheer.

BASF is now offering a new biodegradable plastic. It goes by the name Ecovio® FS and it has joined the existing Ecovio product line. BASF has optimized this new plastic for two specific applications: for coating paper and for manufactur¬ing so-called shrink films, which serve to easily wrap packaged goods. For this reason, the first two new plastic types are called Ecovio FS Paper and Ecovio FS Shrink Film.

As has been demonstrated in recent composting experiments, the new Ecovio FS biodegrades even more rapidly than its predecessors, and it has a higher content of renewable raw materials. “Ecovio FS consists of the likewise new, now bio-based Ecoflex® FS (a biodegradable polyester made by BASF) and of PLA (polylactic acid), which is extracted from corn starch. The use of the new Ecoflex FS raises the proportion of bio-based material in Ecovio FS Shrink Film to 66% and that of Ecovio FS Paper to a full 75%,” explains Jürgen Keck, who heads BASF’s global business with biodegradable plastics.

Futerro, a 50/50 joint venture established in September 2007 by Galactic and Total Petrochemicals, announces the start up of its demo unit in Escanaffles, Belgium. The purpose of the unit is to test a state-of-the-art technology for the production of PolyLactic Acid (PLA) bioplastics of renewable vegetable origin, developed by the two partners.

The demo unit, which has a capacity of 1,500 tonnes per year, will be used to test and improve the successive steps in this process during an internal evaluation, which is expected to last around six months. By that time, Futerro will be able to offer a full range of products made from lactic acid, including lactide, oligomers and PLA polymers for the packaging market, especially food packaging, on the one hand, and sustainable applications, on the other.

It was designed by Telecom Italia Lab, the University of Palermo and the MID design studio and in addition to providing certified environmental credentials, Ingeo enhances both its performance and aesthetics.

Ingeo producer NatureWorks notes that for 30,000 cordless units, the savings which result from replacing conventional oil based material with Ingeo bioplastic, are equivalent to 36 barrels of oil, a full month of electrical energy for 108 European citizens, or driving an average car 75,000 km.
---
Publié par PakBec à 15:50