Bioplastics to pass the one million tonne mark in 2011 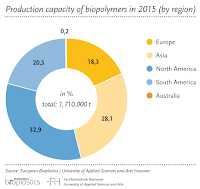 Global bioplastics production capacity will more than double from 2010 to 2015. Capacity is predicted to pass the one million tonne mark already in 2011, according to a current study presented today by the industry association European Bioplastics in cooperation with the University of Applied Sciences and Arts of Hanover at the interpack trade fair in Dusseldorf.
From a figure of around 700,000 tonnes in 2010, the production capacity for bioplastics will increase to a predicted 1.7 million tonnes by 2015. The current year will see capacity pass an important threshold: the first half of 2011 already shows production capacity exceeding 900,000 tonnes. The million tonne mark is close, and will likely be passed by the bioplastics industry within this year.
Read more…
Seven packaging predictions for a resource-strapped future
Tony Kingsbury, executive-in-residence, Center for Responsible Business, UC Berkeley, and an executive with Dow Chemical, shared some of his packaging-related predictions for a resource-scarce future:

1. The most resource-efficient package will win
2. Functionality will be king
3. Keeping the molecule in play will gain momentum
4. Reusables will gain marketshare where it makes systems sense
5. Bio-based packaging materials will grow, but not necessarily biodegradable
6. Transparency will drive societal full-cycle thinking about packages
7. Life-cycle data will increasingly drive material decision-making
Read more…
Malt-O-Meal® Bags The Box!

It takes 345 million pounds of paperboard to make a year's supply of cereal boxes – that's the weight of 734,747 jumbo jets! Through the new Bag The Box™ movement, Malt-O-Meal is out to change the way people think about their breakfast choices, and how products – such as cereal in a box – can affect the environment.
To kick off the program, Malt-O-Meal has launched a website and blog devoted entirely to Bag The Box, where users can view fan-created videos and exchange ideas on sustainable packaging and green initiatives
Read more…
Sustainability Survey Reveals Challenges in Global Packaging Industry
The need to package food, consumer and industrial products in a more sustainable and affordable way dominates the worldwide packaging industry, according to DuPont’s global survey of consumer packaged goods companies and packaging converters.
More than 500 packaging professionals were surveyed and over 40 percent sited sustainability as the toughest challenge while 33 percent named cost as a major factor.
Read more… 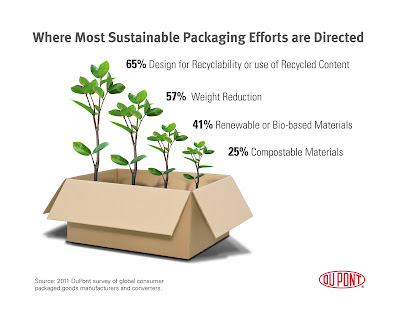 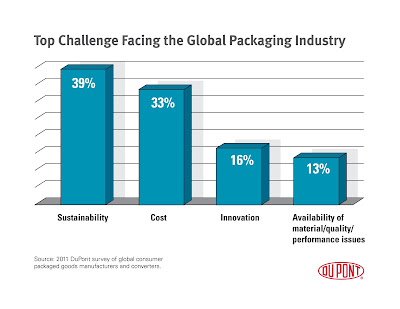