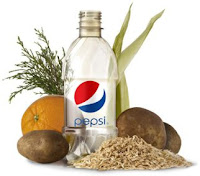 PepsiCo said its bottle, made of switch grass, pine bar, corn husks and other biological materials, “far surpasses existing industry technologies”. It is 100 percent recyclable.
The company said it has created a bottle that looks and feels identical to traditional petroleum-based PET, and offers the same product protection. PepsiCo will pilot production of the new bottle in 2012. If the pilot is successful, the company will then begin full-scale commercialization.
Read more…
Publié par PakBec à 23:54