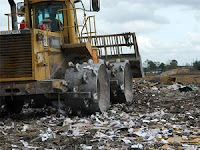 Companies that say their packaging will biodegrade in landfills as if that feature is a benefit are actually touting that they're contributing to a system that hurts the environment.
As more companies are marketing the fact that their wrappers, boxes and other packaging materials will break down in landfills, the Sustainable Packaging Coalition (SPC) looked into if that really is a positive when it comes to greenhouse gas emissions.
The coalition, a project of non-profit GreenBlue, found that waste biodegrading in landfills has an overall negative impact on greenhouse gas emissions, and it's not going to get much better in the foreseeable future.
Many landfill sites have installed gas-capturing systems to keep some gases generated by waste out of the atmosphere. The systems don't capture 100 percent of emissions, but can redirect a large chunk of them after a few years in operation.
Landfill gas is made up of carbon dioxide (CO2) and methane, which is 25 times more potent than CO2 in contributing to global warming. At sites where gas is captured, the methane is combusted to create energy.
The SPC found that its takes seven units of methane being turned into energy to offset one unit of greenhouse gas emissions (when the different gases' impacts are normalized). As of 2009, 30 percent of the methane made at landfills in the U.S. was being turned into energy, and 40 percent was being emitted, making emissions from landfill biodegradation overall harmful.
Positive impact would come from a scenario where more than 70 percent of methane is turned into energy, but that comes with other caveats, like needing microorganisms to do a better job of weakening more methane.
"It is theoretically possible that biodegradation in landfills could someday incur a net beneficial greenhouse gas impact, but it is not probable that all landfills in the U.S. will be outfitted with optimal energy recovery systems," the report says. "In the foreseeable future, biodegradation in landfills may be expected to continue resulting in a harmful greenhouse gas impact."
Source
Publié par PakBec à 23:19