Food standards officials discovered that 40 per cent of packets of chicken in a range of supermarkets, convenience stores and butchers were covered with bacteria on the outside. 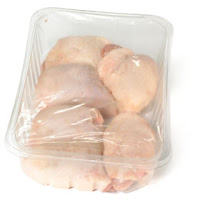 Of 20 packets of chicken studied, eight had food poisoning bacteria on their wrapping while seven chickens were contaminated inside the packet. One tested positive for salmonella.
Shoppers are now being warned to wash their hands after handling chicken cartons to combat the risk of catching the campylobacter bug which can induce vomiting, diarrhoea and abdominal pain.
Birmingham Food Safety officials found that there was no link between the chickens infected inside and outside the packaging. Both types of bacteria are dealt with by thorough cooking and hand washing.
The council's food safety team is believed to be the first to test packaging and it has reported its findings to the Government's Food Standards Agency (FSA) and major retail chains.
Read more...
Publié par PakBec à 00:20