Packaging is a $5-billion-a-year industry in Quebec, so one of the first things to say about the Charest government's proposed law on recycling, which specifically targets packaging, is that it displays a certain political courage. The new legislation will also benefit both the environment and the taxpayer. 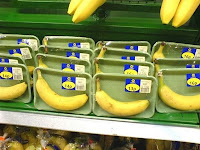 In an ideal world, recycling would pay for itself. That was the original promise. In practice revenue from recycled waste hasn't met that optimistic expectation.
Accordingly, companies in Quebec that sell packaged goods currently pay municipalities 50 per cent of the cost of blue-box recycling and the follow-up sorting process.
---
Recycling costs - which cover the collection and sorting of packaging like cereal boxes, juice containers, tins, etc., and also newspapers - have reached more than $125 million a year in Quebec. Taxpayers and packaging manufacturers now split that cost.
---
Under the new law, companies will become responsible for 100 per cent of recycling costs by 2015. The province says recycling costs will will be about $143 million by then. (The newspaper industry is exempt from packaging rules but will pay recycling costs of $3.8 million by 2015.)
Ultimately, of course, it's consumers who will pay, through higher retail prices. But this is a fairer deal that the current one, in which all taxpayers bear the cost for packaging from goods only some of us actually buy and enjoy.
------
Quebec's approach of forcing the producer to pay the costs directly should have the effect of encouraging manufacturers to rethink how much packaging is needed. There will be issues of fairness in collecting these fees, but those can be managed.
---
The onus will quite properly fall on manufacturers who have, after all, gotten a free ride for decades. Thanks to the environmental movement, we all understand now that when it comes to throwing things away, there is no "away." Someone has to pay to bury, burn, stockpile, or recycle what's left once a product and its packaging have reached the end of their useful lives.
---
When recycling becomes the responsibility of manufacturers, ways will be found to reduce packaging and to recycle it more efficiently. Plastic detergent bottles, for example, have shrunk, as manufacturers make a more concentrated version of their product.
---
With the rate of recycling plateauing across the country, Quebec was right to turn to legislation as a way of moving forward. Legislation worked wonders several years ago when European rules forced the electronics industry to eliminate toxic substances from products, and to take them back and recycle them.
---
The effect of those European directives has been to make the world a safer, less toxic place. Quebec's new law could result in dramatically less packaging. It's a step worth taking.
---
Source
---
Publié par PakBec à 12:18

A potent inspiration, were one needed, to find merit in packaging having a reuseful value in some form or other, preferably designed-in, to both brands and their consumers.