SENTINEL Bioactive Paper Network researchers working to develop inexpensive paper that can destroy, deactivate and detect deadly pathogens announced today that it has developed novel inkjet-printed biosensors that quickly and easily detect two test neurotoxins. The paper-based sensors provided reproducible results, after storage at 4º C for two months, showing the system is suitable for storage and use in the field.
---
In a paper published in the July 1 issue of Analytical Chemistry, John Brennan and his research team at McMaster University describe a method for printing a toxin-detecting biosensor on paper using FUJIFILM Dimatix Materials Printer. The paper entitled, “Development of a Bioactive Paper Sensor for Detection of Neurotoxins Using Piezoelectric Inkjet Printing of Sol-Gel-Derived Bioinks,” has demonstrated that inkjet deposition is a simple, portable and cost-effective method of adhering biochemical reagents to paper. The research team has brought the concept of bioactive paper a significant step closer to commercialization.
--
Gartner rewrites e-paper futures 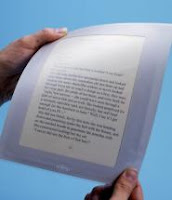 Gartner has predicted the use of electronic paper could increase steadily over the next few years, but only if the cost of e-paper displays falls far enough to challenge print media.
E-paper is a display medium intended to mimic the appearance or ordinary ink on paper while being rewritable. The technology has been in the labs for at least 10 years.
Notably, HP is looking at development of new viewing surfaces using bi-stable liquid crystal displays which can hold their image even when disconnected from their power supply. It is also looking into the use of new light-emitting devices that incorporate nanocrystals in polymers which could be manufactured using inkjet printing techniques.
---
Publié par PakBec à 19:22