At least 50 chemicals capable of interfering with hormones is permitted in packaging in the United States and the European Union, a recent study says. 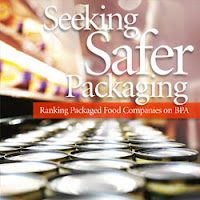 Most people don't worry about what's in food packaging, but the cans, boxes and bottles used as containers for everything from pop to microwave popcorn are an underappreciated route of exposure to synthetic compounds able to disrupt normal hormone functions, according to a new study.
The number of chemicals capable of interfering with hormones and permitted in packaging in the United States and the European Union is at least 50, the study said. The best known are bisphenol A (BPA), which mimics estrogen and is used to make polycarbonate, and phthalates, which are added to plastic to make it more flexible and is able to block the production of testosterone. Because food regulators around the world generally follow each other's leads, the list of chemicals would be largely similar in Canada.
Some researchers are worried that these chemicals are able to leach out of packaging, with possible health effects, much in the same way that the ancient Romans were inadvertently exposed to lead through their use of the dangerous heavy metal in water pipes.
“Food packaging is a large but underestimated source of chemical food contamination,” contends Jane Muncke, a Swiss environmental toxicologist who conducted the study.
The view that residues are dangerous is disputed by companies making packaging and by regulators, who say exposures are far too low to be of any consequence.
But the study, which appears in the current issue of the journal Science of the Total Environment, is one of the first to try to survey the extent of the trace chemical residues migrating out of packaging into the foods and drinks by reviewing more than 140 scientific reports on the subject.
In many of these reports, researchers detected contaminants leaking from packaging. These include: perfluorinated compounds, used to line containers to make them grease and water resistant but are under investigation as cancer-causing agents; triclosan, an anti-bacterial compound that has leached into flour and rice from containers, and the biocide ortho-phenylphenol, which has been detected in beer.
Although packaging chemicals amount to inadvertent additives to food, there is no requirement that consumers be told about them on ingredient labels.
Health Canada, in response to questions from The Globe and Mail, said that because these compounds aren't deliberately placed in food, they don't come under disclosure rules.
“Health Canada does not require the labelling of trace additives used in food packaging materials because these chemicals are not intentionally added to foods and do not fall under the definition of food additives, which require mandatory labelling,” the agency said.
Although there is a vast variety of packaging materials, ranging from cardboard to metal cans to glass, the study says plastic most often comes into contact with the food or beverage, even if the containers aren't at first glance made of the petroleum product.
Most tin cans, for instance, have a liner made of an epoxy resin that contains BPA. Glass containers typically have lids with plastic inside them, and plastic is a liner of the Tetra Paks used for many juices.
Plastics are complex mixtures that can contain numerous additives, catalysts and other materials, increasing the odds that they contain something that is biologically active. “Even manufacturers of plastics do not know the full extent of chemicals that are present in their products,” Dr. Muncke said. “Virtually all food contact materials are plastic, or coated/lined with plastic-type materials.”
The hormonally active compounds cited in the paper that are permitted in packaging are not household names and include many compounds known mainly to chemists, such as benzophenone (an ultraviolet light blocker in plastic packaging), nonylphenol ethoxylate (a wetting agent ), and methylparaben, (an anti-fungal agent).
The concern over hormonally active compounds leaching into foods from packaging is relatively new. Up until now, food safety regulators have focused almost all of their attention on traditional food contaminants, such as lead, mercury, dangerous microbes and pesticides. But that may be changing.
Last year, Health Canada proposed banning BPA from plastic baby bottles and has asked infant formula makers to minimize the amount of the chemical leaching from their tin cans, the first time that a regulator has taken aim at a hormonally active compound widely used in food packaging.
But Health Canada says BPA exposures from packaging are too low to be a concern for older children or adults. In the United States, there is a congressional request to the Food and Drug Administration to review research on the safety of BPA in food contact uses.
The packaging industry says the traces of packaging materials that get into food are nothing to worry about and many currently used products enhance safety. The North American Metal Packaging Alliance, a Washington-based trade group for can makers, said last month that “there is no readily available” alternative to BPA, which allows high temperature sterilization of canned food, preventing microbial contamination.
Dr. Muncke works for a company that makes equipment for packaging, Emhart Glass SA. The study carried a statement saying the company doesn't restrict her freedom to conduct or publish research.
The study said illnesses associated with hormones that have been increasing in frequency include breast and prostate cancers, obesity, insulin resistance and autoimmune diseases. It said the possibility that the incidence of these diseases is linked to chemical contaminants in foods needs to be studied.
Source
---
Publié par PakBec à 07:26